Pure Devotion And The Competitive Spirit, Part I


Our Organization: Its Aims and Objectives (Activities) 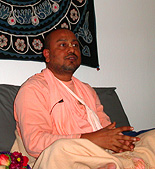 RVN: Sripad Bodhayan Maharaj, please tell the readers of this Internet interview about who you are and how you came to Sri Gopinath Gaudiya Math. Tell us about the establishment of the Math. When was it founded? Tell about yourself personally, please.

Srila Bodhayan Maharaj: (Maharaj laughs) I was born in a Vaishnava family. My grandfather, Madan Mohan Prabhu was a disciple of Prabhupada Bhaktisidhanta Sarasvati Goswami Thakur. By his inspiration everyone in our whole family are Vaishnavas and all are disciples of our Spiritual Master, His Divine Grace Srila Bhakti Promode Puri Goswami Maharaj. Also by my grandfather's inspiration, my whole family has the mentality of Vaishnavas and thus I became a servant of Srimad Mahaprabhu. I am not a Vaishnava yet, I am trying to be a Vaishnava. Officially I took initiation from Guru Maharaj on January 21, 1986. It was Putrada Ekadasi. Unofficially, I had a connection with him (Srila Gurudeva) since my childhood. I took birth in 1964. So between 1964 and 1986, that means, how long? When I was 21 years old, at that time, I took the first initiation from him. When I took initiation he had no established Math. He had no buildings. He later gave initiation to my whole family, in our house (Purba-Ashram). At that time there was no question of staying in Math. The family was inspired to approach him to keep one place for Vaishnava practices, so after his inevitable departure we could continue to gather with others. Following repeated requests, he agreed. He gave us permission to open a centre, a small place in Mayapur, but only for bhajan. It was 1987 when we purchased that small piece of land, and thus our Math was situated and now stands. There is a history behind Sri Gopinath Gaudiya Math name. Guru Maharaja's personal deities, Radha-Gopinath, ultimate need (prayajana tattva). For that reason, he kept this name. He had a personal temple, which was given by the Bengali King of the Burdwan District at Burdwan, Kalna. Previously the King had named the temple Ananta Vasudev Temple. But when he got the temple, Gurudeva immediately re-named it Sri Gopinath Gaudiya Math. After that he saw there was not enough facility for his preaching to follow in the footprints of his beloved Srila Bhaktissidhanta Sarasvati Goswami Thakur. He left that Temple and gave the responsibility to his youngest brother, Nani Gopal Chakravarti. So, that first temple once again became Ananta Vasudev Temple and Gopinath Gaudiya Math had no home. Sri Gopinath Gaudiya Math official start came in 1987, when we purchased the Mayapur land. And in 1989 we built one small building there. Guru Maharaj gradually started to spend time there. Actually not gradually, but frequently he did bhajan there. Often people would come to take darshan. Guru Maharaj was feeling that the Deities of Sri Radha-Gopinath should be established and served there. By the desire of Srila Guru Maharaj and the devotees, Sri Radha-Gopinath appeared on May 7, 1990. After the Deities appeared Srila Guru Maharaj made a habit of remaining with Them there and started to make arrangements for the facilities as they presently appear. Also on that same day, due to certain circumstances, Guru Maharaj asked me to remain with him. That's when I thought of coming into the Math. He told me that an auspicious date was approaching, May 28, 1990, and that should be the day to join him. I followed his advice and I have been here ever since.

RVN: In a few words, please tell us about Srila Bhakti Promode Puri Maharaj. Who is he? Whose disciple is he? Tell us of his merits and accomplishments. Tell us about his relations with other Vaishnavas. Please introduce us to your Guru Maharaj.

Srila Bodhayan Maharaj: Guru Maharaj's behavior. Guru Maharaj, His Divine Grace Srila Bhakti Promode Puri Goswami Maharaj. His behavior is the absolute example of a Vaishnava. Of a Vaishnava's nature, there are four main qualities. First quality is humility. His humility was excellent. No one can compare with him. He is an example of humility. For that reason other Vaishnava were attracted to him. It would always be a nice connection. And then his tolerance. Amongst the Vaishnavas communities, societies, there are so many problems. But he was not one of these problems; he never engaged in discord. He was always in his mood, his divine mood. He felt it this tolerance. He never criticized any soul, no one at all. I never heard any criticism to others. Instead of criticism his nature was to glorify. He made a habit of glorifying the devotees. Here, I can give one example of his nature. Once Madhava Maharaj -- Srila Bhakti Dayita Madhava Maharaj, my Guru Maharaj, and group of devotees from Caitanya Gaudiya Math, went to Jagannath Temple and made big sankirtan in front of Jagannath. Guru Maharaj was leading this kirtan: Jaya Jaya Jagahhatha, Sri Sacinandana. Tribhubana kore Yanre charana vandan, like this. At that time one thief, one pickpocket put his hand in a small bag of Gurudeva's. Actually Guru Maharaj used to take this bag if someone gave pranami (donation). So, one pickpocket put his hand for taking that amount of money from him. But he did not care for all that. One disciple of Madhava Maharaj, at that time he was a brahmachari, now his name is Bhakti Prasad Puri Maharaj, he caught this pickpocket's hand and saying with shouting: "Maharaj, pakarlia pakarlia". It means, "I catch him, catch that pickpocket!" Then Maharaj was telling him: "Hey now! Why do you break my mood? Forget about money, give him the money". But this mood is not common, it will not commonly appear again. This kind of mood was there, then instead of that he was glorifying the thief, instead of threatening him, he was glorifying. "He needed money, so because of that reason he came here to take the money from us. So, what's the harm?" This was His mood. So, that is why each Vaishnava, each person had no conflict with him. We cannot think of all that. After his departure, when we brought his transcendental body from Jagannath Puri to Mayapur, at that time more than five thousand people came to see His body. All Acharyas from ISKCON and from different Gaudiya Maths, who were near around Mayapur, everybody came to see him, with groups of their disciples. It was the 22nd of November 1999. There's small piece of land. Actually our Math is too small. Can you imagine this, in this way can you think? No one, no one can, no one has any kind of conflictions with him. Since his joining, he always kept connection with so many Vaishnavas. I even saw those whom we are calling sahajiyas babaji. They also used to come, to visit and see Gurudev. Even Lalita Prasad Thakur, Prabhupada's brother, his disciples also like to keep his photo in their temple, still. After his departure they called me to their temple to arrange a festival. They wanted to make festivals in my presence. So, I went there with a group of devotees and I was there the whole night and day, the 24 hours performing Harinam Sankirtan. From 6 o'clock in the morning until next 6 o'clock in the next morning. Harinam Sankirtan, then nagar sankirtan, then a big feast with speeches about the glories of our Gurudev. But they are sahajiya! Everyone could see the qualities of Srila Gurudeva. So, you can imagine this, his divine nature. The nature of a Vaishnava is ajata satraba. Ajata satraba --- means who has no enemy. He is absolute free from enemies. Everybody was happy to know him. Absolutely he was an example of that nature. So, in this way he was honored by all Vaishnava communities.